Ife-Modakeke clash: Reps member, Taofeek Ajilesoro sues for peace
Sit-at-home: Ebonyi Police declare zero-tolerance for lawlessness
MURIC warns Gov. Lanlong against interference in trial of suspect arrested over 22 Muslims killed
Southern Kaduna Senator condemns Zango Kataf attack, killing of 15 persons
Boko Haram: Reasons insurgents are surrendering in droves emerge
Osun 2022: Oyinlola welcomes decamped APC members to PDP
Atiku attended Buhari son’s wedding, ignored PDP crisis – Adeyanju
2023: It’s time to allow youths rule Nigeria – Yahaya Bello tells Tinubu
Obiano hiding under Ojukwu’s philosophy to perpetrate corruption – Group
Buhari acting like Roman Emperor Nero, failed to deliver campaign promises – Afenifere’s Adebanjo
Seven feared dead in Delta as car falls into river
Police arrest three suspected armed robbers, recover stolen phones, dummy gun in Delta
Zangon Kataf: Three killed, others injured in reprisal attack in Kaduna
Amotekun arrests 65-year-old suspected ritualist for allegedly hypnotizing 18-year-old boy in Akure
Court remands NSCDC personnel for rape of seven-year-old in Imo
EFCC breaks into BBNaija Dorathy’s house
BBNaija: I made Tacha, Erica be themselves on reality show – Cee-c reacts to comparison
BBNaija: Details of Liquorose, Emmanuel conversation last night on relationship
BBNaija: Why I want Saga evicted from reality show – Emmanuel
BBNaija: I’m attracted to Jackie B – Pere reveals
LaLiga: Ancelotti reacts as Real Madrid draw 3-3 with Levante
Serie A: You must be careful – Napoli boss, Spalletti warns Osimhen after red card against Venexia
EPL: Ian Wright names Arsenal’s best player in 2-0 defeat to Chelsea
EPL: John Terry hails one Arsenal player after 2-0 defeat to Chelsea
EPL: Lukaku names his best goal after scoring against Arsenal
Published
on
By
The Economic and Financial Crimes Commission, EFCC, on Monday morning broke into former BBNaija housemate, Dorathy Bachor’s apartment.
Dorathy disclosed this on her Instagram story as she lamented the sad incident.
Narrating the incident, Dorathy expressed frustration at how unsafe it is to be a Nigerian.
On her Instagram story, she said: “I feel like my head is about to explode.
“At 4:35 I heard a loud bang and voices, I rushed out to see five armed EFCC men in my living room and one of them saying ‘Oh na that Big brother girl be this’.
“In my confused state I was trying to understand why they broke down my door. Then one of them said they were looking for someone who ran into the estate and I should lock my door and stay indoors and not say a word.
“I’m shaking at this point and so confused because at what point is this Okay.
“What is the need of being a citizen of this country when I can’t feel safe in my own house.” 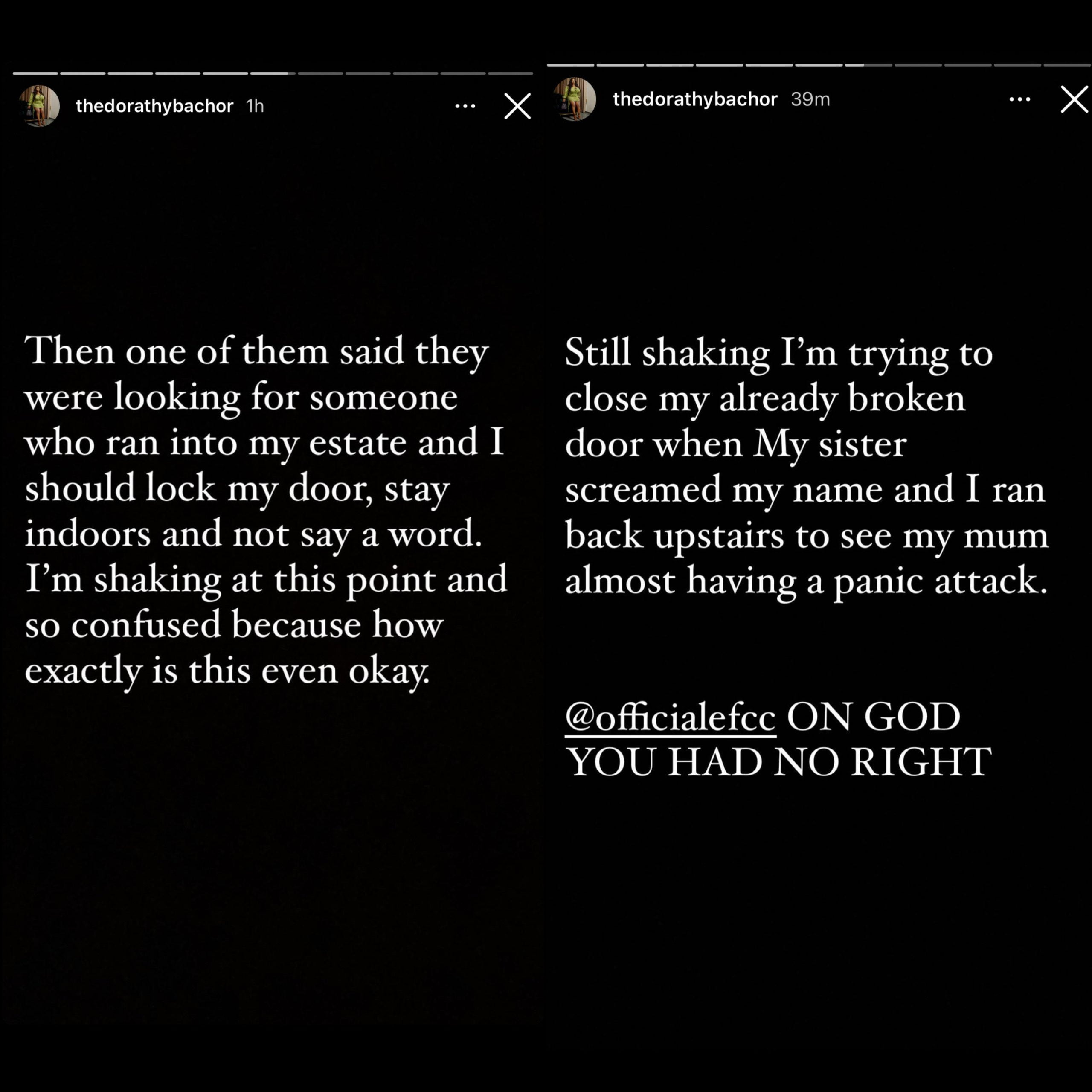