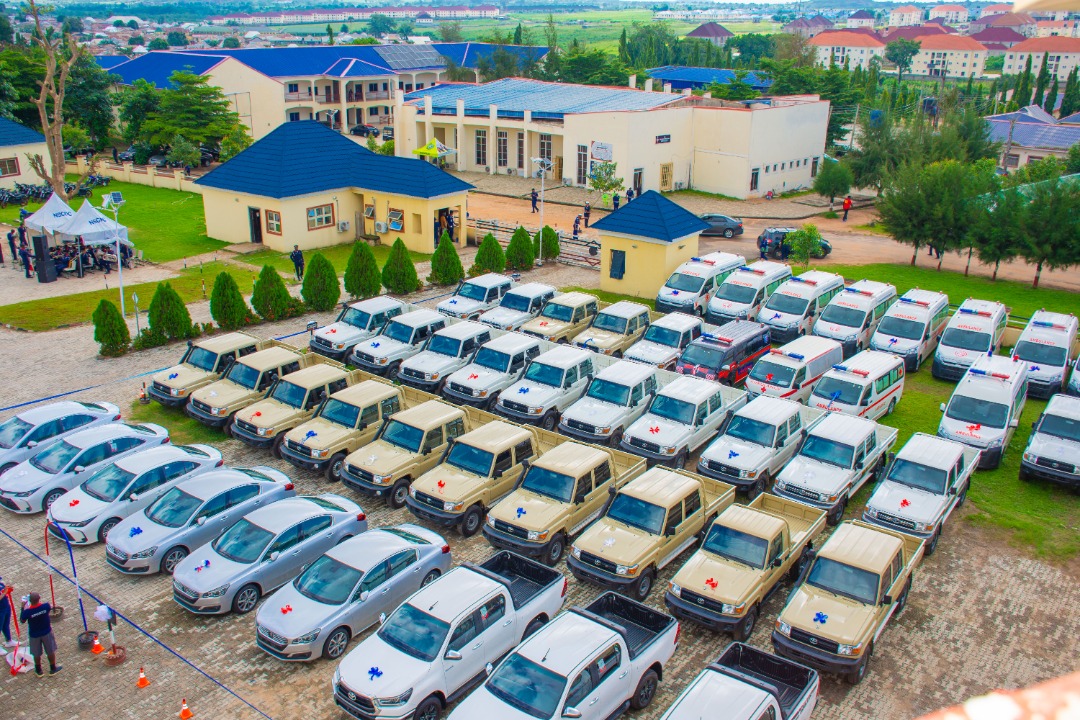 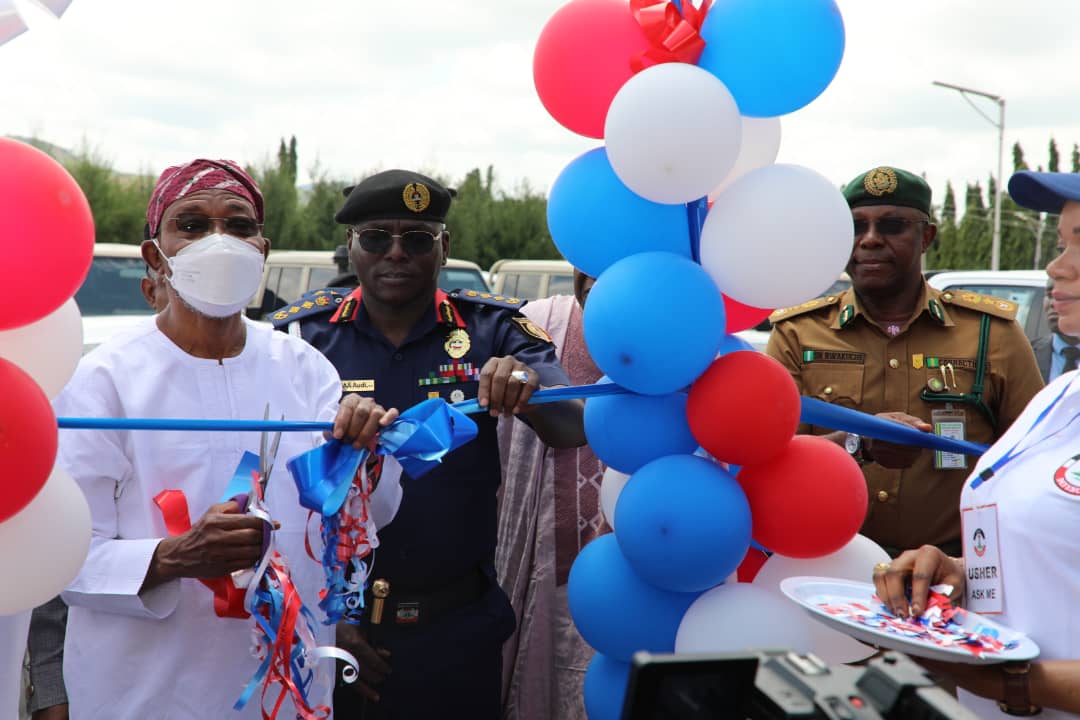 From left to right, minister of interior, Rauf Aregbesola and the Commandant General, NSCDC, Dr. Ahmed Abubakar Audi at the commisioning of 96 operational and utility vehicles yesterday in Abuja PHOTO: Tina Abeku 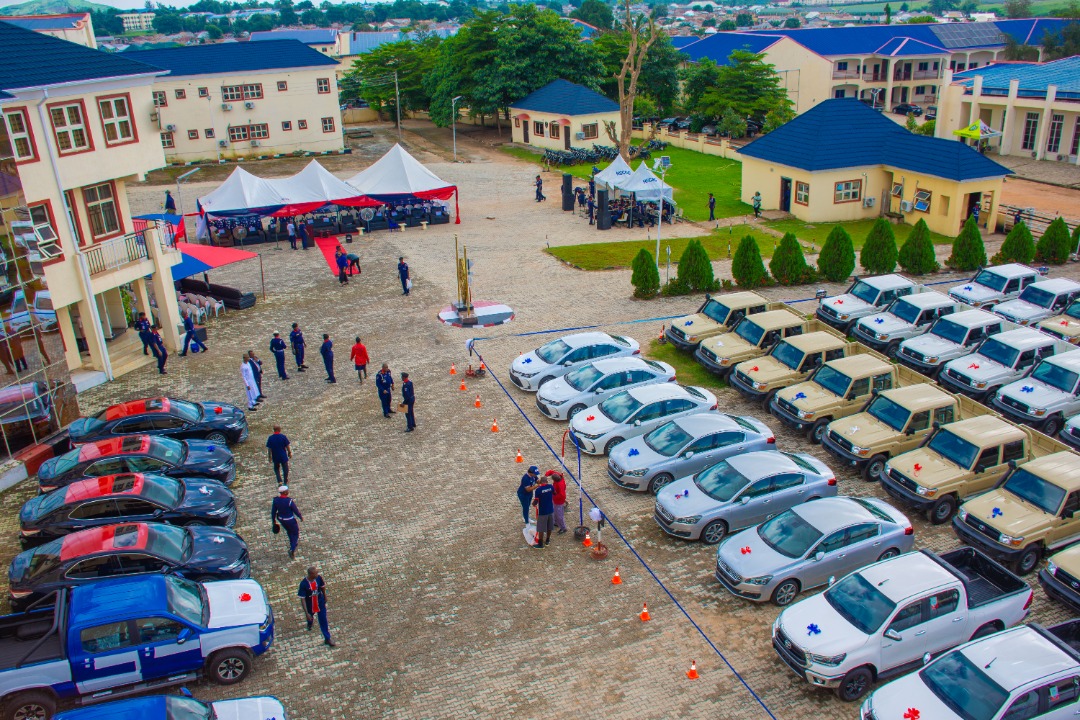 To further demonstrate the government’s resolve at repositioning Nigeria’s internal security organs toward ending insecurity, minister of interior, Rauf Aregbesola, has charged men and officers of the Nigeria Security and Civil Defence Corps, (NSCDC), to show more commitment by living up to expectations.
The minister gave the charge at the commissioning of 96 newly acquired operational and logistics vehicles by the agency, yesterday in Abuja.
He said the fact that the government has continued to revolve strategies to address the many challenges of insecurity, is a clarion call for all security agencies to rise to the occasion in defence of the nation from all forms of internal security threats hence there will be no excuse whatsoever, for any failure to do so so.
According to him, “The federal ministry of interior plays an important role in managing the nation’s internal security.
“We do this in policy formulation generally, and in the supervision or superintendence of the four paramilitary agencies with us and these agencies are the Nigeria Security and Civil Defence Corps, NSCDC, the Nigeria Immigration Service, NIS, the Nigerian Correctional Service, NCOs, and the Federal Fire Service, FFS.
“These agencies are in the forefront of the business of protecting lives and property and putting an end to insecurity in the country by playing a complementary role with other security agencies like the Nigeria police.”
He said unlike the Nigerian army and the Nigerian police which have their creation roots in the British colonial era, “the civil defence is our own indigenous creation; you are the most prominent Nigerian security creation, you can’t afford therefore to be brutal. You must be found to be civil in dealing with Nigerians.
“In our march towards economic development and building a safe and secure Nigeria, particularly in this last quarter of the year, we want to be totally intolerant of anything that threatens the safety, security and peace of Nigeria and Nigerians.”
Aregbesola explained that the commissioning of the vehicles represents another leap towards repositioning the country’s internal security organs, particularly the NSCDC for better performance in tandem with President Muhammadu Buhari administration’s policy of tackling insecurity head-on.
The minister said, “By December, we want Nigerians to celebrate the end of year festivities in peace because the ministry under my watch remains unwavering and committed to strengthening the capacity and capabilities of these organs of government to effectively deliver on their mandate.”
Earlier, Commandant General, NSCDC, Dr Ahmed Audi, said the operational and utility vehicles are meant to enhance the capacity of the corps in the areas of patrol, surveillance and quelling all potential threats to national security such as crude oil theft, bunkering, smuggling, and pipelines vandalization among others.
He said premium will be placed on the vehicles’ maintenance culture and proper use to ensure longevity and ensure that the security features such as Closed Circuit Televisions, (CCTVs), and others that are fitted into them are not bastardized as the vehicles are fortified such that they enable easy information and intelligence gathering.
“By the time we distribute all the vehicles, we are going to accompany it with a very strong worded circular on the maintenance culture because gone are the days when government vehicles are used anyhow without maintenance so we have made provision in our Standard Operation Procedure, (SOP), a policy that henceforth, maintenance culture is paramount and any officer who does not maintain the vehicles, will be sanctioned.
“This is an indication to Nigerians that the civil defence corps is ready hence we made categorical statements when we commissioned the gunboats last week in Port Harcourt that all oil thieves should relocate to other countries because we are coming after with the equipment that the government has given us and with the collaboration we have with other sister agencies,” he said.
He continued, “Going forward, we will adopt a scientific approach on how to deal with insecurity.
“As it is at the moment, our nation is passing through an unsystematic form of conflict which has never been before. This conflict is identified as ‘asymmetric warfare’ tracing its antecedent to many devastating effects to countries like Syria, Yemen and Srilanka among others.”
Follow Us

How the British Created a fraud called Nigeria