Punch Newspapers
punchng.com © 1971-2020 The Punch newspaper
Ojukwu, Gowon, Nzeogwu
Segun Adewole
The Nigerian Civil War otherwise known as the Biafra War was fought from 1966 to 1970. It was between the forces of the Nigerian Government and the forces of Biafra which seceded from the country at that time.
As Nigeria celebrates the 2021 Armed Forces Remembrance Day, it is appropriate to take a brief look at the key actors in the civil war.
Here are eight of them:
1. Patrick Chukwuma Kaduna Nzeogwu
Nzeogwu was a young military officer who took part in the first military coup in Nigeria on January 15, 1966. He led a group of soldiers who killed Nigeria’s Prime Minister and the Premiers of the Northern and Western regions of the country. He died during the civil war.

Aguiyi-Ironsi became the Head of State in Nigeria after the bloody coup of 1966 led by Nzeogwu. He was assassinated by a mutiny led by Northern military officers which included Major Murtala Mohammed, Captain Theophilus Danjuma, Lieutenant Muhammadu Buhari, Lieutenant Ibrahim Babangida, and Lieutenant Sani Abacha.

READ ALSO: 10 things you should know about Nigeria’s civil war
3. General Yakubu Gowon (retd.)
Gowon became the Head of States in Nigeria in 1966 after the counter-coup which led to the death of his predecessor Major General Aguiyi-Ironsi. He was the Head of State during the duration of the civil war and remained in power till 1975.

Ojukwu was the military governor of the defunct Eastern Region which broke away as The Republic of Biafra in 1966. He became the leader of Biafra which fought against Nigeria until it surrendered on January 15, 1970. He died in 2011 at the age of 78.

He was the General Officer Commanding 3 Armoured Division, Nigerian Army. He led the 7th and 8th battalion tasked to carry out a seaborne assault on Bonny in the Bight of Benin during the civil war. He died in September 2014.

READ ALSO: VIDEO: Nigerian Military displays colour, precision on remembrance day
6 General Murtala Mohammed
Murtala Mohammed was part of the Northern military officers who carried out the counter-coup that resulted in the death of the then Head of State, Major General Aguiyi-Ironsi. During the civil war, he was the Commander of the 2nd Infantry Division which pushed back Biafran forces from the Mid-Western Region. His Division then advanced into the Eastern Region through the River Niger after several failed attempts which resulted in casualties. He became the fourth Head of State in 1975 and was assassinated on Friday, February 13, 1976. 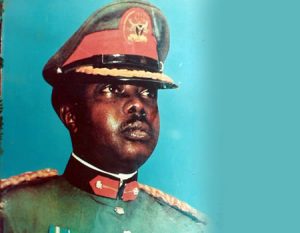 7. Victor Adebukunola Banjo
Banjo was a colonel in the Nigeria Army who fought on the side of Biafra after he was accused to have been part of the first coup in Nigeria. He was later executed on the orders of the Biafran leader, Ojukwu, on an allegation that he was plotting to overthrow him (Ojukwu).

8. Philip Effiong.
He was the Vice President and the second President of Biafra who announced the surrendering of the secessionists on January 15, 1970. He made that announcement in the presence of General Yakubu Gowon at the Dodan Barracks in Lagos.

READ ALSO: Pigeons released by Buhari refuse to fly at Armed Forces remembrance
punchng.com © 1971-2021 The Punch Newspaper
By submitting you agree to our privacy policy