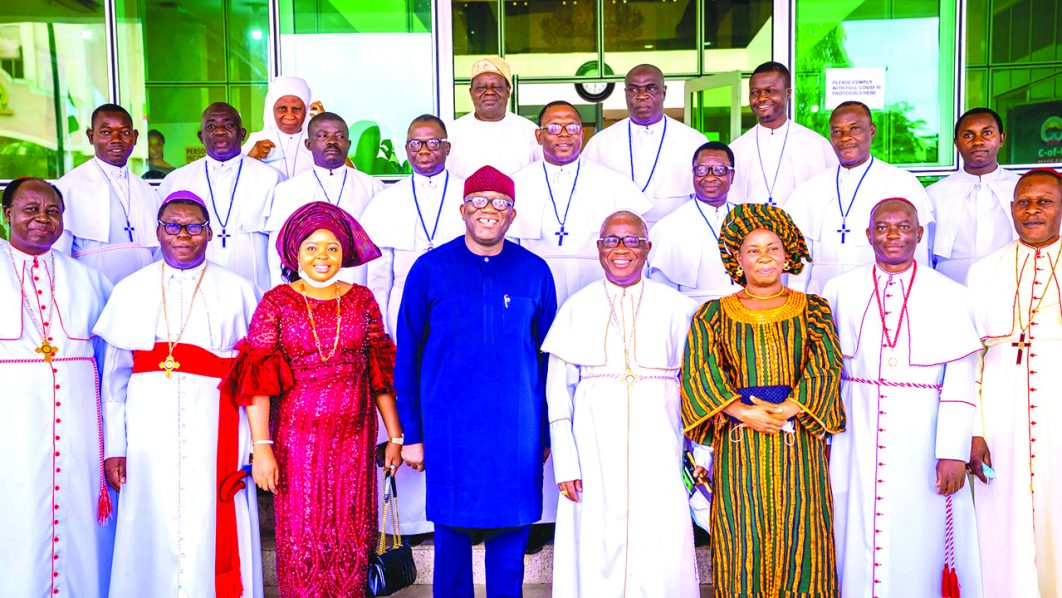 • Lawyer lauds people’s support for Kanu, Igboho
• Urges NLC to embark on a two-day strike
• HURIWA backs Buratai’s diplomatic intervention
• Says envoy merely doing ambassadorial job
Ekiti State Governor, Dr. Kayode Fayemi (fourth left), with the Prelate, Methodist Church Nigeria, His Eminence, Dr. Samuel C. Kanu Uche and some bishops, during the Prelate’s courtesy visit to the Governor’s office, Ado-Ekiti…yesterday.<br />
The Prelate, Methodist Church Nigeria, Dr. Samuel Chukwuemeka Uche, has blamed the litany of regional agitations for secession in the country on poor leadership and bad governance.
Uche spoke in Ado-Ekiti, yesterday when he led some selected priests of the church on a visit to Ekiti State Governor, Dr. Kayode Fayemi.
While addressing the congregation at the Methodist Church Nigeria, Diocese of Ifakim, on Sunday, the Prelate had also appealed to Nigerian leaders to be wary of their actions and do what is right to keep the country united.
The cleric noted that Nigeria’s major problem was bad leadership, stressing that those agitating were left with no choice but to make their demands known through various unconstitutional means.
He commended the governor for his infrastructural development and for sustaining peace among the people, adding that the qualities possessed by the governor were a clear indication that he can be “a good president of Nigeria.”
Uche described Fayemi as a detribalised Nigerian who believes in the unity and peaceful co-existence of the country with a track record of excellence, versatility, and people-oriented visions.
Fayemi, who stressed the need for concerted efforts geared towards nation-building, maintained that the task of nation-building was a continuous process, as the nation must continue to exist without any sense of discrimination and feeling of oppression among its subjects.
He, therefore, urged more prayers to overcome its challenges and to sustain harmonious and peaceful co-existence of the people.
MEANWHILE, a legal practitioner, Ayo Ademiluyi, has praised members of the Indigenous People of Biafra (IPOB) and Yoruba Nation agitators for supporting Kanu and Igboho in their trials.
A statement signed by Ademiluyi said: “I extend solidarity with the members of the Indigenous People of Biafra (IPOB), who will be storming the Federal High Court in peaceful marches as Mazi Nnamdi Kanu will be arraigned and take his plea.
“I also extend solidarity with the Yoruba Nation agitators who will be storming the Cour du’Appeal in Cotonou for the continuation of the extradition hearing of Igboho.”
Ademiluyi, therefore, advised the leadership of the Nigeria Labour Congress (NLC) to embark on a two-day warning strike to activate the mandate of the last NLC NEC.
IN another development, the Human Rights Writers Association of Nigeria (HURIWA), has backed Nigeria’s Ambassador to the Republic of Benin and former Chief of Army Staff, Gen. Tukur Buratai (rtd) over his role in the Federal Government’s move to extradite Yoruba separatist campaigner, Sunday ‘Igboho’.
In a statement signed by its Executive Director, Emmanuel Onwubiko, yesterday, in Abuja, HURIWA said the role Buratai is playing as alleged by telling the government of the host country that someone within the territory is wanted is just within the job description of his office as President Muhammadu Buhari’s representative in Benin Republic.
The statement read in part: “Ambassadors also help travelers from their home country, explain foreign policy and evacuate refugees from dangerous situations. Because of the sensitive nature of their careers, ambassadors carry out their duties with a diplomatic demeanour, with the goal of keeping a positive relationship between the country that is hosting them and their home nation.”
To enable commenting and other interactive features, please switch to the more advanced .
Get the latest news and analysis of issues from Nigeria, Africa and around the world, direct into your inbox, daily