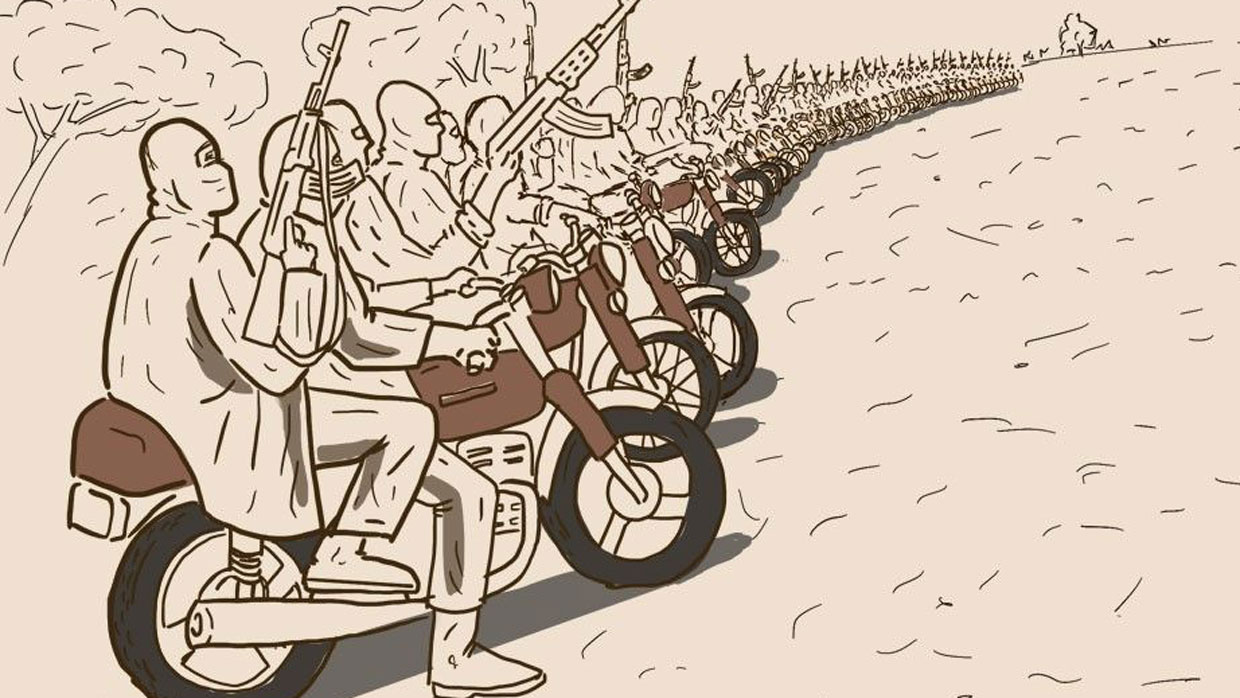 If you know the enemy and know yourself, you need not fear the result of a hundred battles.  (The killing season, by Mason Cross).
The July 26th 2021 copies of major newspapers reveal the character of monumental misgovernance that has created tension, fear, lack of confidence and trust of millions of Nigerians on the capacity and willpower of President Muhammadu Buhari to discharge his primary Constitutional duty.
Section 14 (2) (b) of the constitution specifically provides thus: “(2) It is hereby, accordingly, declared that (b) the security and welfare of the people shall be the primary purpose of government: and the security and welfare of the people shall be the primary purpose of government”.
The true picture of Nigeria was published on page one of most newspapers aforementioned dramatizing the colossal failure of President Buhari to protect Nigerian children from terrorism by a bunch of armed youths from Northern Nigeria identified as belonging to Fulani ethnic group.
The front page photos were those of the few out of the dozens of children that were freed by the Kaduna based terrorists after they collected N50 million ransom from the parents of the students who were kidnapped from Bethel Baptist High School in Kaduna State. Another three dozen School kids kidnapped from Minna Niger State are still been held in captivity.
Meanwhile from the Emirate of Bichi in Kano State comes the announcement that a committee of over 150 members has been constituted to plan the wedding of the son of President Muhammadu Buhari to the daughter of the Emir. So here we see the different shades of treatment that kids from poor homes and those from privileged homes get. So the kids from poor homes can stay as long as possible with kidnappers whom the government and the media wrongfully classify as ordinary bandits instead of calling them the terrorists that they are. These are the agents carrying out the agendum of the killing season in Nigeria under the government of President Muhammadu Buhari.  Sadly the international community watches as Nigeria’s poor kids can’t go to school but are even kidnapped by terrorists.
As stated earlier, some of the truly independent newspapers such as The Guardian placed these photos strategically on the front pages of their highly reputable newspaper. It will be recalled that the government realizing how weak in character and moral it is to defend and protect children from terrorists resorted to a crude attempt to muzzle the press.
The National Broadcasting Commission wrote an illegal letter to media houses not to report terrorists attacks in details in a brazen disregard of section 22 of the constitution which says: “The press, radio, television and other agencies of the mass media shall at all times be free to uphold the fundamental objectives contained in this Chapter and uphold the responsibility and accountability of the Government to the people.”
As I write, a lot of people in Nigeria are worried because if the government deliberately refuse to combat terrorists but instead choose to call them mere bandits because of ethnic and religious bias whilst peaceful agitators for self-government in Southern Nigeria such as Nnamdi Kanu of IPOB and Sunday Igboho of Yoruba Nation campaigners are hounded, attacked by state security agencies, it signals something sinister which is why Nigerians who are genuinely afraid of being killed are running away so as to stay alive. Many Nigerians have fled from the danger of cruel death.
Obviously the kidnapping of school children in Kaduna, Katina, Zamfara, Niger states shows that Nigeria is in the season of killings and the failure or refusal of President Buhari to enforce the anti- terror law against the kidnappers in the North has pushed up migration.
The Federal Government, which has failed to live up to the demands of the constitution, has comically decried the rate at which young Nigerians renounce their citizenship in pursuit of greener pasture.
The Minister of Interior, Ogbeni Rauf Aregbesola, said the trend was worrisome and counterproductive. He assured that the Federal government would put a mechanism in place that would keep young Nigerians busy in productive activities. He urged them to stop renouncing their citizenship.
Aregbesola spoke during the Ministerial Alignment Meeting of the Presidential Task Force on Deliverables for Ministries, Departments and Agencies of Government.
Aregbesola said a committee would be set up in the Ministry with stakeholders to oversee the operations and implementation of the deliverables.
He announced that the Director, Planning Research and Statistics (PRS) in the Ministry, Mr. Kabiru Ayuba, would chair the committee, with representatives of the four services under the Ministry and other relevant officers.
But millions of frightened citizens know that the minister is only engaging in empty sophistry because the failure of the government to safeguard the lives of citizens has led to the flight of nationalism and the increasing campaign for self- determination since the government pampers a section of terrorists because of ethno-religious consideration. Interestingly, a recently published history book has just written about the origin of nationalistic tendencies and going through this well researched book, it will become clear that the abandonment of the constitutional duty of protecting the citizens as is being experienced at the moment has led to the death of nationalism amongst a greater percentage of Nigerians.
These historians said as follows: “To be sure, Nigerians whether in their disparate forms or as ‘one people’ – never welcomed colonialism nor the interference of foreign elements in their internal affairs. Thus, they responded in a variety of ways to external domination or colonial rule. Right from the moment they were noticed, Nigerians began to develop a strong sense of nationalism, a strong sense of pride and/or patriotism for one’s homeland and agency towards its defense. Nationalism is the keyword, which underlines such self-help mechanisms through which Nigerians sought to retain or regain their freedoms. Indeed, nationalism it was that helped many Nigerian societies fight external intrusions and eventually become independent of their colonial rulers.”

Nigeria’s history is full of reports of resistance to external domination from the 19th century. The earliest nationalist conflicts in what became Nigeria occurred between the diverse locals and their European visitors, especially the Portuguese, Dutch, and British.
These Europeans sneakily sought to change the internal dynamics of the local environment, control trade, trading routes and even domestic politics of the time, all to their advantage and to the disadvantage of their otherwise good and welcoming hosts. Undeniably, this was well before formal British colonization of Nigeria. Some examples of the great exploits of the likes of King Jaja of Opobo, Oba Eshugbayi Eleko, Oba Ovonramwen Nogbaisi of Bini, King Kosoko of Lagos or the agencies of the Ekumeku warriors, the ‘fighters’ of the Aba women’s war and the Abeokuta women’s revolt, as well as actors in the Enugu coal miners’ strike, to mention but a few, are well documented and noted.
Through their nationalist agencies, all these actors, individually or collectively, challenged external dominations and meddling in their homes affairs. Even after colonial rule had been firmly established, Nigerians continued to effectively exhibit many forms of disaffection and resistance against the colonial administration. (Nigerian History From the Earliest Times To the Twenty-first Century, edited by Christopher BN. Ogbogbo & Okepeh O. Okepeh, Jr).
But all that has fizzled out because of the selective approach being adopted by the Federal Government and the naked nepotistic appointments by President Muhammadu Buhari of only ethnic Fulanis to head strategic internal security institution since 2015. These failed security heads are still being retained even when children are frequently kidnapped from their schools and armed Fulani herdsmen are on rampage across Nigeria carrying out their agendum of the killing season under this administration.
Onwubiko is head of the Human Rights Writers Association Of Nigeria (HURIWA) and was a federal commissioner at the National Human Rights commission of Nigeria.
To enable commenting and other interactive features, please switch to the more advanced .